Carla Perrotta-Pyrgos began her clarinet studies at the age of ten and her enthusiasm for the instrument greatly increased with each competition she entered and won. At the age of 17, she was sent to the Kiwanis Junior Provincial Championship in London, Ontario and won first prize in the Winds category.

Shortly after, she moved from her hometown of 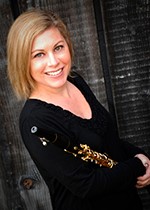 Waterloo, Ontario, to attend the University of Toronto, where she studied with Avrahm Galper and in 1997 received her Bachelor of Music in Performance Degree. Carla completed her Artist Diploma at the Glenn Gould School (Royal Conservatory of Music) with Max Christie, principal clarinet of the National Ballet Orchestra, in 2003.

Carla also manages a busy schedule as a recording artist for Somerset Entertainment, playing with the Licorice Allsorts Clarinet Quartet, chamber music concerts with Collective Musings, teaching privately and is a sought-after clinician in the greater Toronto area.